This weekend I accomplished a project I've been wanting to do for at least a year. I recovered our couch cushions!

My husband bought this couch from Big Lots when he moved to Texas. He had a limited budget, an apartment to furnish and Big Lots was close.

When we first started hanging out, he invited me over one night to watch a movie. I made him brownies and he decided we should watch The Descent. Since we were just getting to know each other, he was on one side of the couch and I was on the other. Maybe 15-20 minutes into the movie I flew across the couch and buried my face in his shoulder. From then on, whenever we watched a movie, we sat close to each other. So, even though the couch is cheap and not the best material, it has a lot of sentimental value.

Plus....I prefer to fix something if possible. And we have a dog and two small kids. Buying a new couch just seemed like a really dumb idea. We can get nice furniture when the kids are older. ;)

Last summer I noticed the couch was "peeling". Between a dog who I'm pretty sure camps out on the couch when we are gone, and a toddler, it was only a matter of time.


Then last October we discovered some huge rips in it. I had plans to make covers for it but the holidays hit, then I got pregnant and very sick, then the couch went into storage for six months while Philip was away at tech school and Andrew and I lived with my parents.

So...now we are here and fixing the cushions was priority number one. Last week I went to Hobby Lobby and picked out fabric. Fabric was on sale for 30% off, and I got three yards. I also picked up upholstery thread, new sewing machine needles and zippers. All my materials cost less than $50.


Yesterday I started sewing. JohnDavid however is having a growth spurt or something but, he is nursing every five minutes. So I only finished one cushion. Over the course of the day, I finished the other two. After JohnDavid and Andrew were in bed, I put in the zipper on the last cushion and collapsed in relief. Yay, new couch! 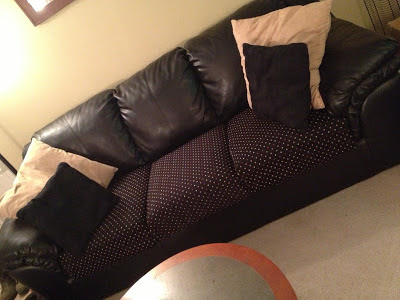 I had to separate the dots from all going the same way because it hurt my eyes when they were.

I have a pillow in the recliner that has these colors, and then I have enough extra fabric to make another pillow, probably for the little wooden bench by the fire place.

I'm pretty happy, I love how it turned out!

The next project.......cloth blocks as a gift for JohnDavid for Christmas!
Posted by Kymberlee at 11:30 PM