The Proof is in the (organic, all-natural) Pudding 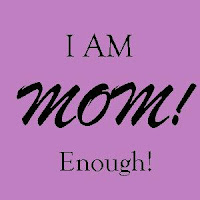 Welcome to the I Am Mom! Enough! Carnival hosted by Jennifer at Hybrid Rasta Mama and Mandy at Living Peacefully with Children.

This Carnival is dedicated to empowering ALL parents who practice and promote and peaceful, loving, attachment parenting philosophy. We have asked other parents to help us show the critics and the naysayers that attachment parenting is beautiful, uplifting, and unbelievably beneficial and NORMAL!

In addition to the Carnival, Joni from Tales of a Kitchen Witch and Jennifer from True Confessions of a Real Mommy are co-hosting a Linky Party. Please stop by either blog to share any of your posts on the topic.

Please read to the end to find a list of links to the other carnival participants. Post topics are wide and varied, and every one is worth a read.

A few weeks ago, TIME magazine published an issue with a cover and article that set the parenting world on fire, and not in a good way. The title "Are You Mom Enough?" and cover, and the general public's response to extended breastfeeding aside, the mention of Attachment Parenting (AP) was also met with great hostility. The comments I saw, heard and read shortly after the issue was published just left me shaking my head. Sometimes in anger, most of the time in disbelief. AP was greatly misunderstood. While (in my opinion) TIME didn't do a fantastic job explaining AP, the misunderstanding of Attachment Parenting isn't their fault.

We live in a society that values independence and shakes its head at dependence, on anything. And that includes a child being dependent on their mother from birth. Our society wants children to sleep on their own, be okay with separation, not need to eat frequently. Crying is viewed as manipulation and being attentive to a baby or child will often be met with responses of "You are spoiling them." or something similar. There are the "horror stories" being passed around of fifteen year olds who still can't sleep without mom or dad in the same room, all because mom and dad co-slept. The stories of a child who has no patience and throws a huge fit over a toy all because mom and dad immediately rushed to them as a baby. The mom who is so tired after devoting her whole day and body to her children that her husband leaves her out of frustration.

This is where the disconnect and misunderstanding happens with the critics of Attachment Parenting. The critics of AP would like to paint it as a method of "helicopter parenting", "hover moms", parents who micromanage every aspect of their child's life. They want to portray attached parents as selfish and unable to let their children grow up. AP hurts marriages and causes divorce and affairs. The critics say AP results in undisciplined, spoiled, needy adults. But that is not what Attachment Parenting promotes.

According to the Attachment Parenting International website, AP promotes: "[...] parenting practices that create strong, healthy emotional bonds between children and their parents. For life. So they can take those bonds with them into their adult lives and share them with their children. And their children can do the same. A life cycle of compassion and connection." To me, that doesn't sound like hovering, micromanaging, spoiling. But, the real test comes however when the child is grown. Something our media has failed to focus on.

I've been very blessed in my parenting journey to have several "mommy mentors" as I like to refer to them. These are women who are older than me, with adult and/or teenage children who have been a guiding light for me as a mom. They also would fit into the "AP" category, whether or not they claim the title.

My mom was my first mentor. She practiced most of the "principles" of AP before there were principles or before AP had a name. While I don't specifically remember everything about my parent's parenting, I do know that as a teenager and now as an adult, we have a very open, loving, respectful relationship. I would consider my mom one of my best friends, and I have since I was a teenager. I know my parents created an environment for my brother and I that was secure when we were very young. We were always welcome in their room, even in the middle of the night. We were never treated as though our ideas or stories or beliefs were stupid or inappropriate. We were allowed to explore and learn on our own timeframe As a result, my brother and I are both adults (26 and 28, respectively) with families, careers and lives of our own. We grew into independent, self-sufficient adults. I might be biased, but I wouldn't call myself needy, spoiled and undisciplined. Nor would I think anyone would refer to my brother that way.

While I was pregnant with Andrew, I happened into a world of "crunchy moms". It started because I wanted a natural, non-medicated birth. I think that was probably the "gateway drug" into the world of natural methods. Hand-in-hand with a more "natural" way of living (think cloth diapers, organic foods, herbs and homeopathics) often seems to go AP. So I met moms who had the same parenting philosophy as I did (I still didn't know it was "AP" at the time) and many of them had older kids.

Sally and Kristin were both two of my first friends and mentors as I started out on my parenting journey. They were big proponents of responsive, instinctual parenting but I'm not sure I ever heard either one of them use the term "AP" often, if at all. I don't know if either realized how much they were encouraging me, but they were. Shortly after Andrew was born, the comments started coming in, telling me to let him "cry-it-out", not to wear him or hold him so much, not to breastfeed him, he needed to be scheduled, Ferberized, Baby-Wised and pretty much anything else our society expects us to do with babies, except what God intended for us to do with them - mother them. As I struggled to keep my eyes open and figure out what was best for my son, my husband and myself; my mom, Sally and Kristin were there with constant encouragement. "Your baby will not need to nurse every hour eventually." "Enjoy the snuggles and don't focus on what 'needs' to be done." "WEAR YOUR BABY!!" and my mom's constant reminder of "Listen to your instincts" were the things I remember being told. And I listened to them. Why? Because I could see the proof in their own kids. My brother and I were grown, and I could tell we turned out well, even if I am biased on that. Sally, the mother of six, ranging in ages from 17-2 when we very first met, and Kristin, the mother of four (now five), her children ages 11-3 at the time. I saw how their kids interacted with each other and their parents. I saw kids who were free spirits, children who were secure and confident...and as I've gotten to know them moreso over the years, they've continued to be some of my favorite people to be around. Spoiled, needy and undisciplined are not terms I could imagine anyone using with these children.

Do these children turn out that way "in-spite" of these parent's desires to foster a respectful and loving environment? Not likely. They turned out that way DUE to how they were raised. The proof is in the pudding, as the saying goes. And more often than not, you will see adults who are secure, confident and have respectful relationships with everyone around them because they were raised that way.

I'm already seeing the results with my first (and only, at the moment) child. My son will be three in two short weeks. Co-sleeping, baby-wearing, responsive parenting (ie he cries or fusses, I respond, I don't ignore) and practiced extended breastfeeding. In the past four months he has weaned, potty-trained and decided he needs to "sleep alone". (He informed me of that at 3am one morning.) He is having more and more independent play time daily, and doing more and more tasks himself. It's hard to let go, but that's the other part of Attachment Parenting. Letting go when our children are ready. He still needs his cuddles after naps. He still likes someone to sit with him before he falls asleep, but his dependence on myself and his father is slowly disappearing with each passing day. He's not even three so it's not like he can drive or bathe himself or cook his own food (he can crack an egg though!), but it's slowly changing. I'm happy knowing there is a secure foundation, one that fostered an openness and an attachment to him from birth. He is ready for independence because he is secure that I will be there if he needs me!

Attachment Parenting has never been about making kids so attached they are unable to grow up. It's about giving them security early on so that they can gain independence on their own timeline, instead of having it forced on them. That security is going to come at different times for different children, and part of AP is recognizing the individual needs of each child in that regard, rather than grouping them into a box by age or developmental milestones.

If you want to learn about AP, ask those who are practicing it. You will probably learn that Attachment Parenting isn't as extreme as you think. You will probably learn that if you are in a parent-child relationship and trying to foster love, respect and healthy bonds for life, you are already practicing Attachment Parenting without even knowing it, or claiming the title.

Thank you for visiting the I Am Mom! Enough! Carnival hosted by hosted by Jennifer at Hybrid Rasta Mama and Mandy at Living Peacefully with Children. Please take time to read the submissions by the other carnival participants and check out previous posts at the linky party hosted by Joni from Tales of a Kitchen Witch and Jennifer from True Confessions of a Real Mommy: (This list will be live and updated by afternoon May 28 with all the carnival links.)
Posted by Kymberlee at 7:17 PM